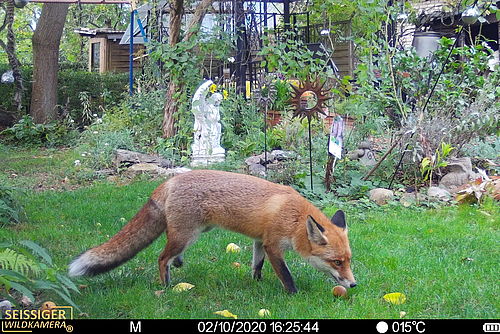 Urban environments represent a special case because human presence and influence may have fundamentally changed the rules of the game. About 150 animal cameras installed by Berlin citizen scientists in their gardens in five rounds from fall 2018 to fall 2020 produced tens of thousands of photographs. Their analysis by a team of scientists from the Leibniz Institute for Zoo and Wildlife Research (Leibniz-IZW) sheds light on how foxes, raccoons, martens and cats get along with people. and between them in the city: the three wild species used the same localities, but with little temporal overlap during the night. All wild species avoided domestic cats. And during confinements, they were more often recorded, especially at night. This information and much more is published in a recent article in the “Journal of Animal Ecology”.

The analysis of the photographs is part of the citizen science project â€œWildlife Researchersâ€ at Leibniz-IZW led by Stephanie Kramer-Schadt, one of the pillars of the science-society interface project â€œWTimpactâ€ funded by the German Federal Ministry for Education and Research from 2017 to 2021. In the â€œWildlife Researcherâ€ project, professional scientists and citizens of Berlin have joined forces to study the ecology of urban wildlife. The gardens were chosen as study sites because they attract and deter wildlife by acting as a food source with composts, crops, or leftover pet food, and are places for close encounters with people or domestic cats.

The project team divided the city of Berlin into a regular grid of nearly 300 cells of two by two kilometers each. For five periods, each lasting one month, Berlin citizens with a private garden could apply and were chosen to produce a uniform distribution over the network. Participating Citizen Scientists installed an animal camera in their backyard, which photographed the animals when the camera’s motion sensor detected movement. The scientists then combined this data with local information about the gardens such as garden size, local tree cover, potential food sources and fence height as well as other information such as population density. During each sampling period, the cameras recorded between 2,200 and 3,000 photos of cats, 300 to 1,200 photos of red foxes, 250 to 1,000 photos of raccoons and 50 to 300 photos of martens, as well as many photos of other mammals.

“What interested us was to know if and how flexible and adaptive carnivore species interacted spatially and temporally in human-dominated environments”, explains the first author, Dr Julie Louvrier, IPODI researcher at the Technical University of Berlin and visiting scientist at the Leibniz-IZW department. of ecological dynamics. “That means we wanted to know if they use the same places, and if so, if they avoid each other by coming at different times of the day or night, for example.”

Here are the main findings of Louvrier and his colleagues:

â€œWe humans place strong selective forces on wildlife, changing their behavior and way of life. The closures were a blessing in disguise, like an experiment, providing the opportunity to study what our wild neighbors do when people are suddenly absent from urban space, and we are extremely grateful to all of the citizen scientists who participated in our unique survey, â€Stephanie Kramer -Schadt said.

“Our survey sheds light on the rules underlying interactions in a community of medium-sized carnivores in an urban environment”, specifies Louvrier. There are several factors that influence these interaction patterns both spatially and temporally, especially when considering the effect of human presence. Humans play the role of “hyper-keystone” species, and their pets dominate local wildlife, even species relatively well adapted to human-dominated landscapes.