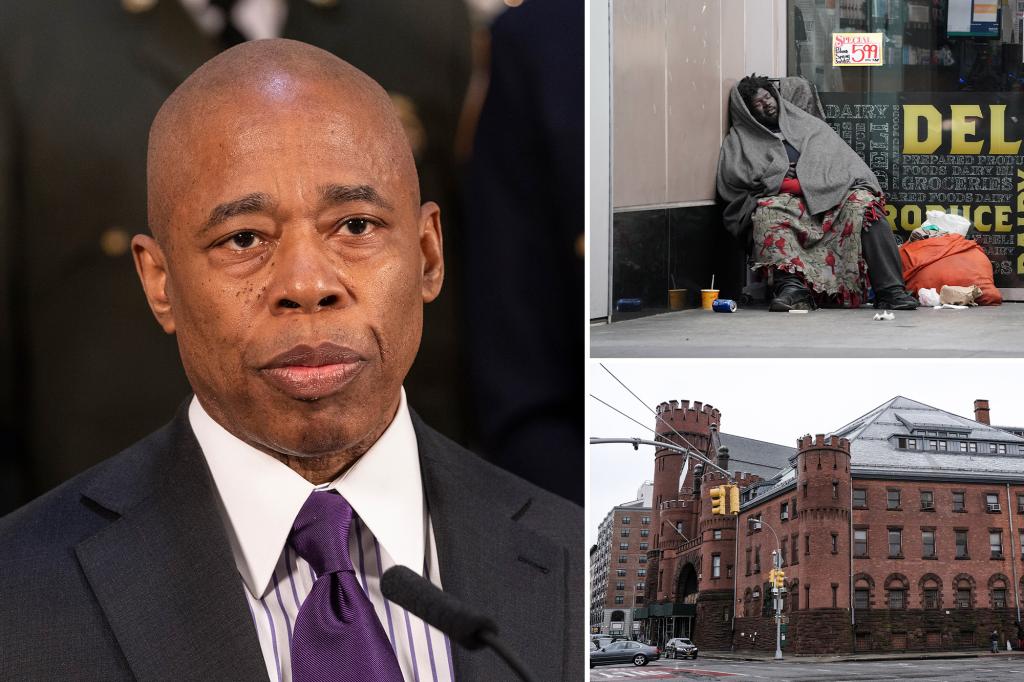 Mayor Eric Adams has only visited three homeless shelters despite pledging to carry out unannounced inspections at facilities in the scandal-stricken system, The Post has learned.

And only one of those surprise welcomes is planned, as required by the state, according to records.

Faced with a growing homelessness crisis and an expose by the Post about filthy and unsafe conditions at city-run or city-funded shelters, Adams swore a crackdown on March 10, then later claimed to have visited five facilities, one in each borough.

Institutions are required to report unannounced visits to the state shelter watchdog.

A spokesperson for Adams insisted that two unexpected visits – which were not documented in records obtained by The Post – took place on the same day in March in the Bronx.

“Mayor Adams has made multiple visits to shelters and drop-in centers across the five boroughs in the middle of the night and during the day, and has visited homeless encampments and subway stations for the first few months. of his administration,” said Fabien Levy, press officer for the town hall. said in a statement when pressed about the discrepancy in the trips the mayor claimed to have taken.

“As the mayor has said repeatedly, every New Yorker deserves a safe, clean place to rest at night,” he added.

None of the three visits took place at one of the infamous facilities highlighted by The Post – triggering Adams’ initial promise of spot checks.

“I’m going to visit some of these sites,” Adams told reporters on March 10. “I will do contextual visits. Unacceptable and we need to do better.

Advocates for the city’s indigent have attacked Adams for breaking his promise, which the mayor made in response to widespread criticism of his orders to carry out encampment sweeps at train stations and on streets.

“If Mayor Adams really visited shelters frequently, he would understand why so many homeless New Yorkers are sleeping rough or on the subway,” said Jacquelyn Simone, senior official of the Coalition for the Homeless.

The regulations require municipal shelter operators to notify both the city’s Department of Homeless Services and the state Office of Temporary Assistance and Disability “immediately” whenever there is a “[u]Presence programmed on the spot of the press or an elected official.

Only one such report was filed with the OTDA between when Adams first signed up on March 10 and April 20, when the application for registration was made under the law. on freedom of information.

It shows Adams visited a shelter in East Harlem on 125th Street on March 26 for “about” 16 minutes around dinnertime.

The mayor arrived at 6:24 p.m. and the report said Adams asked questions of the staff as he walked through the kitchen, TV room and computer room. He posed for a photo with staff members before leaving at 6:40 p.m., according to the report.

City Hall claimed the March 26 shutdown was actually Adams’ second unannounced visit to a shelter and provided never-before-seen photos that a spokesperson said showed the mayor visiting another facility in the Bronx on March 17. march.

Levy also pointed to a contemporary tweet sent on March 17 from Adams’ official account that showed the mayor visiting a treatment center in the Bronx.

The three visits stand in stark contrast to Adams portraying himself as taking the homelessness crisis seriously.

“That’s why I went out to visit my refuges. I wanted to see the product,” he said on MSNBC’s “Morning Joe” show on April 8. “I didn’t announce that I was coming. In the middle of the night, I showed up and said, ‘I want to walk through the shelter. I want to see the product you serve New Yorkers.'”

A week earlier, Adams stressed the importance of making unscheduled inspections of the beleaguered shelter system.

“I do these spot checks. I’m not saying I’m coming, because I don’t want people putting their best foot forward,” Adams told reporters on March 29.

He added that the most needy in the city could be comforted by what he had found.

“I see clean accommodations for people where they can have their meals, they can take showers,” he said.

At the time, he said he visited five shelters, one in each borough. City hall has refused repeated requests for clarification of the discrepancy between Adams’ statements and what the documents show.

In March, The Post revealed allegations by residents of city-run or city-funded shelters of rampant violence, theft, rodent infestations and failure to provide basic sanitary supplies.

“I’m going to visit some of these sites,” Adams said, asking the reporter to come see him after the press conference and provide the locations of the sites highlighted by the story.

“I’ll talk to you afterwards so you can identify some of these places for me and I’ll do pop-up tours,” he said at the time.

8 Great Shows That Were Canceled Too Soon