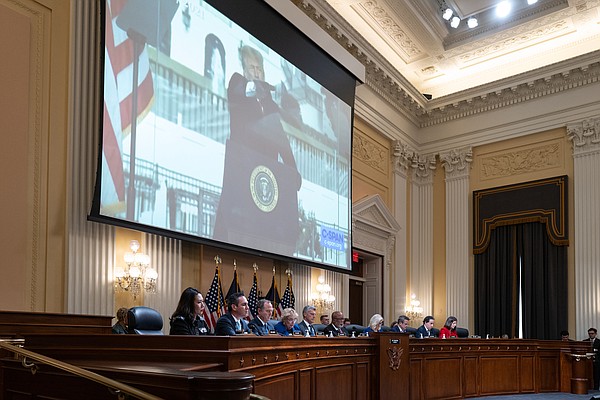 Opinion: The left is finally turning to the Dems’ ‘show trial’

“Show me the man, and I’ll show you the crime.” — Lavrentiy Beria, head of Joseph Stalin’s secret police

Get Trump, the ongoing daytime drama produced by Democrats for Democrats, has been renewed for another season — at taxpayer expense, like PBS. It’s not like soaring crime, inflation, illegal border crossings, and the build-up to nuclear war should occupy the Democrats’ time.

For the new season, there are things to come that are so fantastic that Adam Schiff hasn’t even invented them yet.

But all is not well for the Committee. “Saturday Night Live,” in a rare feat of real and meaningful humor, ridiculed the Jan. 6 committee and its comedic members of Congress last weekend. If you lose SNL, since it covers 99% of liberal malfeasance, then you lose your media coverage. It’s like being in a ground war without air cover.

When not raising taxes, the House and Senate begin their daily sittings with the Pledge of Allegiance, quickly followed by an impeachment inquiry of Donald J. Trump. Although he’s been gone from DC for two years, Trump still lives rent-free in what’s left of Democrats’ minds.

Maggie Haberman of the DNC’s propaganda wing at The New York Times reported that “Former President Donald Trump has told aides he may comply with a subpoena to testify before the Jan. 6 committee. , as long as he can do it live.” That’s how they can’t easily alter his testimony.

If he’s not testifying, I hear committee members have Amber Heard backstage as an alternate witness.

These one-sided hearings have gone on for so long, wasting so much of the country’s money and short attention span, that they should give up. It’s like the longest band drum solo you ever wanted to see. Already.

Keep in mind that the FBI Director and other Federal “Deep Staters” will not say under oath that they had no agents behind the Capitol Riots. In fact, these attentive people have more questions for our federal government than for Trump. The only person killed that day was an unarmed protester, shot by Capitol Mall cops who normally provide Schumer and Pelosi with their lunches and rides to their private jets.

DC-rooted bureaucrats hate Trump lest he cut their agencies and end their financial sauce train. On a very hot day in Washington, when the air conditioners went off in the Capitol, Jan. 6 witnesses and Democratic accomplices at FBI HQ said nice things about Trump just for cold looks.

The dumb thing about “getting Trump” is that the Democrats just make it stronger. People see what DC does to people. You must be thinking, “Could they pick me up next?”

They could knock out the only Republican they could beat from the 2024 presidential race. As usual, their hatred informs their illogical thinking. This whole mess is about two things: 1) Democrats trying to confirm the legitimate election of their man, Joe Biden, and 2) beating up Trump over his 2020 loss. Who knew two men, nearly 80, could organize an election this long?

AOC, who by her own testimony was killed Jan. 6 at her location nine blocks from the riots, still speaks of her fear that day.

We all remember where we were when a man in make-up, dressed in a “Brave Heart” bearskin outfit, nearly subverted our democracy by messing with Nancy Pelosi’s podium. I remember where I was on that fateful day 20 months ago: filling up my Yukon with $1.98 gas.