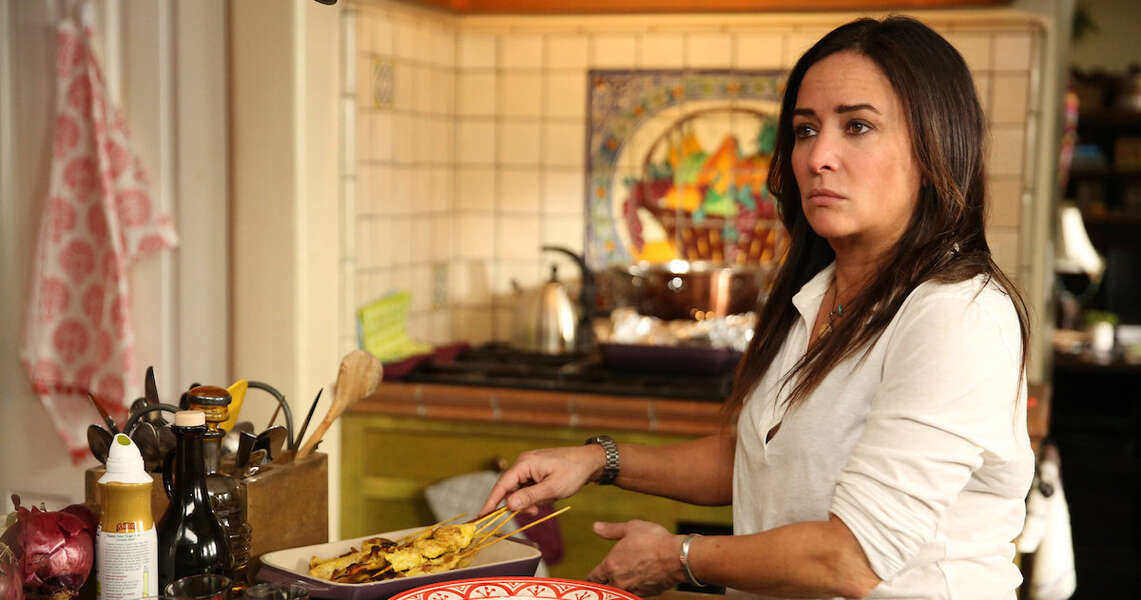 Early on weekend mornings, when her house is still quiet, Pamela Adlon goes to her library, grabs a beloved cookbook or two, and sits down to read. The star of better things, which wraps its five-season run on FX on April 25, Adlon is an avid home cook and proponent of the transformative power of a good recipe.

Her current favorite cookbook “was written by women in a ghetto in Germany,” she says. “I’m very much into shtetl cooking right now, for some reason.” Everyone who watched this season of better things shouldn’t be so surprised, given the delicious borscht she made in Episode 5.

Hearty and intimate, Adlon’s on-screen borscht is emblematic of much of the food from the better things kitchen. It spawned handmade Easter cakes and fancy chilis, Yorkshire puddings and peppermint ice cream. It has also spawned legions of fans who not only love Adlon and better thingsbut also the emotions aroused by the food of the show.

Thrillist spoke to Adlon about food, feelings and why she thinks better things‘ the heart rests right in the middle of Sam’s kitchen.

Thrillist: Why was it so important to you to include food on the show? And not just food, but the act of cooking it, eating it, sharing it, and beyond.
Pamela Adlon: It’s a natural part of my way of becoming a mother. Really, the turning point was when I made the lasagna with Duke in Season 2. [In real life] I had started making lasagna from scratch with fresh pasta sheets and was learning bechamel sauce and all the different kinds of lasagna, like meat vs. no meat. I also learned how to do it by starting in the morning, and that it was a one day process. I wanted to show the process, and I knew I wanted to do the scene with Olivia [Edward, who plays Duke]. Mike [Madison, who plays Max] comes in the room and we say all this crazy shit but we still do the food. So after shooting the scene, I just said, “I’m going to make the lasagna. Shoot me making the lasagna.”

A really fun fact is that one of my cameramen, Forrest Stangel, who’s been with me since the beginning, was a food photographer for Food Network. And so I got this bonus of Forrest being able to take pictures that I love. It was kind of like that perfect lightning-in-a-bottle moment. It was making the lasagna, then interspersing it with Arnold Hall [Rade Serbedzija] steer, and we were off to the races. I never wanted the food to look placed. I always wanted it to look like it was cooked. I want to see steam rising from everything, and I want the pots to be alive. I need water to get out of the sink. I need the light to come on in the fridge. The only thing that is not real, in terms of cooking, on the tray is that the oven does not turn on, but we can use everything else.

You use the show’s kitchen in such a natural way, like you know where everything is and aren’t fumbling around trying to figure out where they put the forks. How did you learn this?
I’ve had times in this kitchen where I’d open drawers and there was nothing I’d find everyone was putting their [script] in a drawer.

It was kind of a jump between season 2 and season 3 when we built the house and the setting, where I said, ‘Don’t have anything that isn’t alive’, whether it’s in the wardrobe or on the counter. Like, I love vintage glass and stuff like that, but they would get these beautiful vintage glass salt and pepper shakers that were 40 years old and from a storage unit. You wouldn’t want to use this salt in anything you’re going to eat or put on your food. I just wanted to have good wine, good olive oil, good balsamic and all the supplies, so much so that at the end of that season when we finished the whole show, the team was able to bring back home all that lovely food and condiments. .

Did you learn anything about staging food from the show? Like, “oh, we should use white plates because food doesn’t look good on dark plates.” “Facing your ladle at the camera”, stuff like that?
It was just that I was extremely picky and my aesthetics of things. If I’m doing something or pouring something into a pot, I’d just wait for the cameramen to adjust to get the best angle where we could see the sunlight come through the window to bounce off the steam, and we could see the food coming. These are all things that I enjoy, because it is an opportunity.

I made an Easter cake for season 3 when we were going to the party. You see Sam making this cake, so I really wanted some chocolate bunnies from Edelweiss, which is that place in LA that’s classic. I used to go there when I was a kid, and that’s where Lucille Ball was inspired to make the conveyor belt chocolate chip from i love lucy. But we shot that scene in the fall, maybe. There were no Easter bunnies in the stores. I said to the prop guy, “Call Edelweiss. I bet we could have a chocolate bunny from Edelweiss.” And then I made the cake and I put the bunny right on top of the cake because I was just making shit. But it looks beautiful, and it looks cool, and it’s also extremely edible.

And that makes sense with what you’re doing on the show, which is intimate, not fussy food. You don’t painstakingly make petit fours or anything like that.
I just thought, “Here is this woman who is a single mother of three and finds the time to provide for her family. It shows people that it’s easy and is actually much more profitable, less expensive and more delicious than taking out food. Food without love has no taste. Someone asked me once a few years ago, “What is your favorite type of food?” and I answered “homemade”. There is nothing better.

When I look better things, I see the kitchen being used as a place where power dynamics can change, like when Sam gets too high and Frankie makes his peppermint ice cream, or when Alex takes over the kitchen in Sam’s absence to make his famous shrimp dish. Does this seem real to you, this transfer of power and stages of life?
I really wanted to show Frankie cooking in Season 3. Sam wakes up at 4 a.m. and smells something, so she goes into the kitchen and Frankie makes carbonara. It is important, when a child of this age knows the techniques of the knife and can cook and create a meal. It was so exciting to see Sam’s child taking over the kitchen.

As for the arrival of Alex, it’s like a horror movie. He reaches into the freezer like he’s going to his underwear drawer, and it stays there forever, just fumbling around before pulling out that shrimp. My editor and I, when we watched this, we screamed. We ate popcorn like we were in a horror movie. It’s Sam’s place, so it’s a whole different vibe when he takes over and it’s a signal of his entitlement as opposed to a power move. I mean, it’s the hub. The heartbeat of this whole house is this kitchen.

Are there any foods you made on the show that you will always associate with the show and your experience there? Or even that you had off-screens that make you think about doing better things?
I’ve incorporated so many of the foods I prepare into the show, it reminds me of my own family and the meals we eat at home.

It’s fun to watch the show as Angeleno and recognize the restaurants you go to. How did you choose what these will be?
I didn’t want it to be like a show where the characters are having lunch and you don’t know where they are. There is no meaning. Even if it’s a restaurant that I made up, like in season 3 when Sam is with Rich and they’re at this Japanese restaurant and he’s like, “Oh, my God, I can never have booking here.” And this family next to them has a garage sale on the table, with toys and books and the mother is reading a story. It’s like, the most disruptive thing, but you’re talking about how the restaurant is, so you have to include all of that.

You don’t just want the food to be meaningless. It is an opportunity in the spectacle, just like music, art, clothing or furniture. Everything is an opportunity to be something that is more than what you settle for.