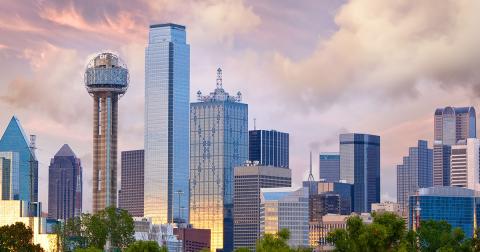 From its inception as a business and trading center for livestock, cotton, and petroleum, Dallas has a long history as a booming city for business.

Today, Dallas buzzes with a different energy. Attracting just under 50 million visitors to the metro area each year, the Big D is one of Texas’ top tourist destinations, brimming with unique neighborhoods to discover, new restaurants to try, museums to browse and adventures to live.

From fresh margaritas (the frozen margarita maker was invented in Dallas) to the trendiest boutiques (the first American mall, Highland Park Village was developed in 1931), Dallas has a lot to offer. Here are eight must-see and must-do things to put on your Dallas bucket list.

Dallas is one of the top sporting destinations in the country and when most people think of Dallas, they think of the Dallas Cowboys. You can catch this beloved NFL team during a game at AT&T Stadium in Arlington, but die-hard Cowboys fans will definitely want to sign up for a behind-the-scenes tour of the world’s largest domed structure.

But sports in Dallas is much more than football. Dallas is home to six major league sports teams. Head to the American Airlines Center to play on the court with the NBA’s Dallas Mavericks or on the ice with the NHL’s Dallas Stars. Watch MLB’s Texas Rangers swing for the fence at the new Globe Life Field in Arlington, check out the field with MLS’s FC Dallas at Toyota Stadium in Frisco or take to the field with the WNBA’s Dallas Wings at College Park Center in Arlington.

Adrenaline Junkies: Start your engines, because Dallas is home to great motorsport adventures. Texas Motor Speedway, near Denton, hosts the NASCAR All-Star Race and its companion NASCAR Open. If drag racing is more your scene, head 40 miles south of downtown Dallas to the Texas Motorplex in Ennis. Or get dusty at Devil’s Bowl Speedway, a half-inclined dirt road located in Mesquite.

Get behind the wheel by signing up for one of the many driving experiences at Texas Motor Speedway or test the throttle on an exotic car at DriveXotic at Motorsport Ranch in Cresson. For real thrills, try powered parachutes, which are a propeller-driven cart attached to a parachute. Future Flight takes off from Caddo Mills Airport, a short drive northeast of Dallas, and offers you a chance to experience the thrill and excitement of flying over Lake Lavon.

A different kind of “driving” in Fort Worth

For a real taste of the Wild West (and to see where your barbecue is coming from), drive 30 minutes straight west to Fort Worth and head straight to the Fort Worth Stockyards. This historic district has 25 restaurants, 14 bars and 50 shops plus the Texas Cowboy Hall of Fame, but the real stars are the cattle. Real Texas Cowherds drive a herd of 17 Texas Longhorns down East Exchange Avenue from the Livestock Exchange Building daily at 11:30 a.m. and 4:00 p.m.

To see the bulls in action – okay, not exactly the Fort Worth herd, but other bulls – get tickets to the Stockyards Championship Rodeo, the world’s only year-round rodeo. Rodeos are held almost every Friday and Saturday night at the Cowtown Coliseum.

If you can’t get enough of the cows yet, head over to Riscky’s Steakhouse. Culinary adventurers can try the cowboy delicacy known as veal fries – breaded, deep-fried bull testicles covered in homemade gravy. Or play it safe with a fried chicken steak or rib eye.

Shop till you drop

Stock up on western gear at the legendary Wild Bill’s Western Store, NorthPark Center’s Pinto Ranch, or any of three Cavender’s Boot City locations in the Dallas Metroplex.

Things really heat up in Dallas once the sun goes down. Whether you like rooftop cocktails, karaoke, or listening to live music, Dallas has plenty to offer for a great night out. The historic district of Deep Ellum is full of bars, clubs and small music venues. It’s the perfect place for drinks, a concert and a late-night snack. Be sure to check it out during the day to see dozens of murals painted on the buildings.

Located in East Dallas, Lower Greenville Avenue is known for its swoon-worthy restaurants, but is also home to a lively but down-to-earth nightlife of live music spots and folk bars. For live music, head to the beloved Granada Theater, a former cinema built in 1946 that is now a concert hall. Next door is Sundown at the Granada, a beer garden offering farm-to-table fare, over 60 beers, and live music amid plank and brick walls.

Once owned by Gene Autrey, the historic Kessler Theater in Oak Cliff/South Dallas is one of the best live music venues in the city and home to an eclectic marquee of local, national and international artists as well as a bar and a dining room.

Dallas has a world-class arts scene centered around the Dallas Arts District – the 68-acre, 20-block urban arts district is the largest in the country. The Dallas Museum of Art features works by artists such as Van Gogh and Warhol, while the Nasher Sculpture Center houses sculptures by Picasso and Rodin, and the Crow Museum of Asian Art brings together historical and contemporary art from different parts from Asia.

There are many performance venues in the Arts District including the Dallas Black Dance Theater, Wyly Theater, Myerson Symphony Center, Winspear Opera House, to name a few.

Although not necessarily a museum, Klyde Warren Park is an amazing work of engineering. The 5.2-acre terraced park is built on a setback highway connecting two Dallas neighborhoods, Uptown and the Dallas Arts District. The park hosts a variety of community events including Music in the Park, dance and yoga classes. Be sure to check out Food Truck Lane.

Located in the heart of North Oak Cliff, the Bishop Arts District is home to more than 60 independent shops, restaurants, bars, cafes and art galleries, making it one of Dallas’ most unique neighborhoods.

Get Stuffed on the BBQ

Sure, Dallas has a fantastic restaurant scene ranging from Texas mainstays like steak and Tex-Mex to internationally inspired dishes like Chinese hand-pulled noodles or traditional South African fried bread (vetkoek), but can you really say you’ve been to dallas without barbecuing? Bring an empty stomach and load up on the best barbecue in Texas at one (or more) of Dallas’ famous barbecue joints.

The Bryan family is the queen of barbecue in Texas and Sonny Bryan’s Smokehouse has been serving brisket sandwiches and giant onion rings in one place since 1958. It’s also the only 24-hour barbecue restaurant in Texas, seven days on seven.

Lockhart Smokehouse has three locations and is the only destination in the Dallas/Fort Worth metro area where you can find Kreuz Market sausages, served on butcher paper, just like the original.

Pecan Lodge in Deep Ellum always has a long line at the door, but their signature Hot Mess (a stuffed sweet potato breast) is worth it.

Recently named one of the top 10 barbecues in the state by Texas Monthly, Cattleack Barbeque serves up some of the best ribs, briskets and sausages in Texas, as well as North Carolina-style whole-hog barbecue sandwiches with coleslaw and crackers. . Be sure to plan ahead: Cattleack is only open Thursdays, Fridays, and the first Saturday of the month.

Get ready for real power

Because everything really is bigger in Texas, Dallas is the host city for the 2023 NADA Show. Polish your cowboy boots, dust off your Stetson, and saddle up for the auto industry event of the year. , to be held at the Kay Bailey Hutchison Convention Center in Dallas, Texas, January 26-29. See you soon !

For more stories like this, bookmark www.NADAheadlines.org in your browser of choice and subscribe to our newsletter here: